“Encouraging young researchers to consider a career in agriculture is a major focus for the National Corn Growers and their State Partners. Those recognized in the poster contest show our efforts are paying off and they provide another reason for optimism,” said Dennis Maple, chair of CUTC and the National Corn Growers Association’s Corn Productivity and Quality Action Team. “I think all of the conference attendees were very impressed with the quality of research and the level of enthusiasm the students exhibited.  These are the people who will drive much needed new uses for corn in the future.” CUTC also conducted a second poster session focused on mycotoxin research efforts which were sponsored by Biocognito. Mycotoxin contamination of corn or DDGs complicates the handling of corn and can reduce limit in marketability and value. 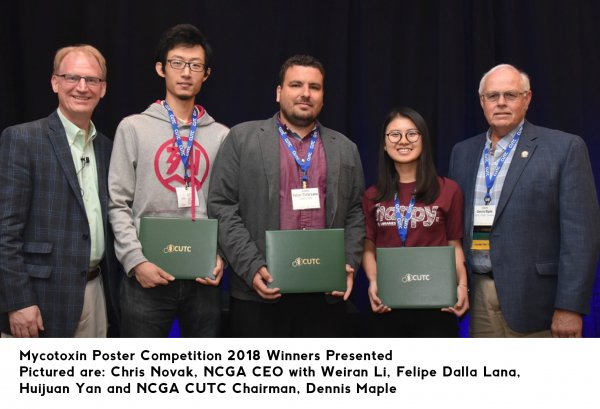 ology at Purdue University for a project titled “Characterization of ZMPK1 and its role in disease resistance to Goss’s Wilt.”

Li’s research focused on identifying genes which are involved in corn immune responses to bacterial pathogens which can then be utilized to slow down the disease development of Goss’s wilt on leaves on corn seedlings. Goss’s Wilt is a bacterial disease can cause systemic infection and wilt of corn plants, severe leaf blighting and ultimately reduced yields.

Held on a biennial basis, CUTC is recognized as an important forum for exchanging ideas and networking with an international audience of 240 experts from agricultural industry, academia, associations and government.

A Commitment to the Future